The use of hair straightening products and treatments is a common part of many women’s beauty routines. Chemical hair straighteners and relaxers are the most permanent way that consumers can straighten even the curliest, coiled hair. But now, research has shown a dangerous connection between chemical products designed to straighten hair and serious health conditions, including uterine cancer – something that consumers have been unaware of and are taking legal action against the companies that sell such products.

The concerning findings of a study by the National Institutes of Health (NIH) showed an increased risk of uterine cancer among women who used chemical hair straighteners. Coupled with previous research that found a link between these same products and higher rates of breast cancer, the upcoming legal claims are bound to shine a negative light on the cosmetics industry. Not to mention, the spotlight will be on the high price consumers may have unknowingly paid in an effort to meet what many consider unrealistic beauty standards.

The first hair straightening lawsuit against L’Oréal and other cosmetics manufacturers was filed in October. Many more hair straightener lawsuits are expected to come following the release of study findings by the NIH.

Are Hair Straighteners and Relaxers Dangerous?

Many harmful chemicals are found in hair straighteners and relaxers, including parabens, formaldehyde, bisphenol A, and metals. Scalps are extremely porous, and because of this, they easily absorb products that are applied to hair.

The scalp is even more sensitive to absorption when burns or lesions occur from the high heat of chemical products and straightening tools. Given these factors, it’s unsurprising that a link has been made between hair straighteners and certain health conditions.

Chemical hair straighteners and relaxers are risky in other ways too. They weaken the hair, making it brittle, but they can also cause chemical burns on the scalp, permanently damage hair, and even lead to hair loss.

While people of all ages and races use products and treatments that straighten their hair, they’re prevalent among Black women because of their natural hair type. These women also tend to begin using straighteners at an earlier age than others, causing more frequent exposure over longer periods of time.

On October 17, 2022, the National Institutes of Health (NIH) released findings from a study examining the effects of hair straightening products on women’s health. The results of the study, which occurred over the course of almost 11 years, showed hair straighteners and relaxers are associated with an increased risk of uterine cancer.

Researchers estimated that 1.64% of women who never used hair straighteners or relaxers would develop uterine cancer by the time they turn 70 years old. Comparatively, the rate of uterine cancer for frequent users was 4.05%. This means that participants who frequently used these products – at least four times per year – were more than twice as likely to develop uterine cancer than those who reported no use.

The study included more than 33,000 U.S. women between the ages of 35 and 74. Of the women involved in the study, 378 were diagnosed with uterine cancer.

Around 60% of participants who used hair straighteners or relaxers in the previous year were Black women. However, the study found no connection between the risk of uterine cancer and race. Instead, it’s important to note that Black women use these products more than others.

Something the study didn’t show was a connection between other types of hair products that participants used, such as dyes, and the risk of certain health conditions. It didn’t identify specific hair straightening products or brands used either. Instead, researchers noted that the harmful chemicals found in such products might be associated with an increased risk of uterine cancer. They also stated that with the scalp’s easy absorption, the risk of exposure to dangerous chemicals might be greater.

Uterine cancer is relatively rare, yet there was a significant increase in the rate among participants who used straightening products. The study raised important and alarming questions. Are chemical hair straighteners and relaxers causing uterine cancer? If so, how did companies that make and sell them not know, and can they be held accountable for putting American women at risk of serious illness? Unfortunately, uterine cancer isn’t the only health condition researchers have linked to hair relaxers. Study findings released in 2019 from another NIH study found that there may be an increased risk of breast cancer among those who use chemical straighteners. The results showed that the more frequent the use, the greater the rate of breast cancer among the nearly 47,000 participants.

Women who used hair straighteners every five to eight weeks were around 30% more likely to develop breast cancer. The study found the association was similar for African American and white women. However, the use of these products was higher among the Black women involved in the research, so the number of cases for this group was also higher.

While no study has concluded that chemical hair straighteners cause uterine or breast cancer, several have identified an association between them. No doubt, the links found in research studies will be an important part of upcoming hair straightener lawsuits. In fact, within a week of the release of findings from the latest NIH study, the first lawsuit against hair straightener companies was filed in the Northern District of Illinois.

L’Oréal was one of five companies named in the lawsuit submitted by Jenny Mitchell of Missouri. It alleges that the chemical hair straightener products she used for decades caused her to develop uterine cancer. With no family history of the disease, Mitchell was diagnosed at age 28 and had to undergo a hysterectomy, taking away her chances of having biological children.

Hair straightener lawyers are filing lawsuits on behalf of victims claiming that the companies knew, or should have known, of the increased health risks their products may cause but that they made and sold them anyway. It also alleges failure to warn of the risks to consumers and that the products were misrepresented as safe through specific advertising and marketing messages. Mitchell is seeking monetary damages and payment for medical costs and other fees she’s incurred from developing uterine cancer.

In interviews, the plaintiff shared she felt pressured by society to use hair straightener products in order to fit in and look a certain way professionally. She began getting her hair straightened at a young age and used these treatments for over two decades. After she learned of the NIH study that associated chemical relaxers with uterine cancer, she felt she had some answers, though they’ve come too late for her and possibly thousands of others.

With studies showing a higher uterine and breast cancer rate among women who use these hair products, many legal professionals expect an influx of chemical straightener lawsuits. Other women have already come forward with similar stories as Jenny Mitchell, but claims seeking compensation will have to demonstrate how companies are liable. They’ll also need to show a clear connection between their uterine cancer diagnosis and the harmful chemicals in hair relaxers.

This is far from the first time companies in the beauty industry have faced product liability lawsuits from consumers who developed severe health conditions after using their products. There are many carcinogenic chemicals in beauty products and treatments that millions of women frequently use, many on a daily basis. Research, awareness of the risks, and accountability are key to keeping consumers safe.

If you’ve used chemical hair straighteners and developed uterine cancer or breast cancer, consult with an experienced products liability attorney. These are complex cases that require in-depth research, expert testimony, and coordination with medical professionals. A free case review can determine whether you have a valid claim and the legal options available. 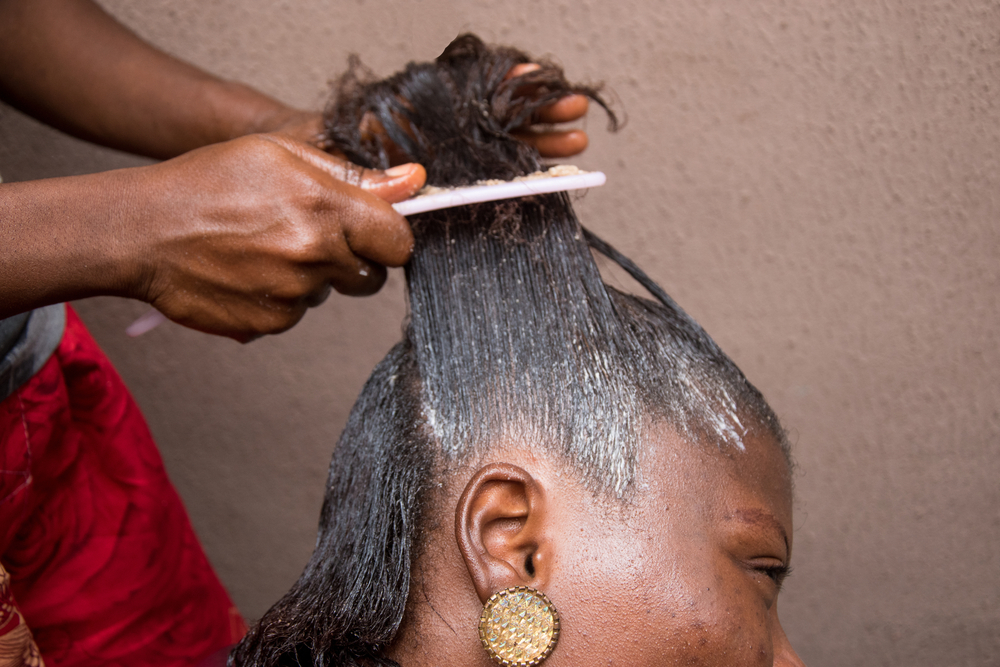 How Do Chemical Hair Straighteners Work?

Compared to serums, blow-outs, heat wands, and keratin treatments, chemical hair relaxers are the most permanent, long-lasting way to achieve smooth, straight hair. It’s a chemical cream that usually contains sodium hydroxide, ammonium thioglycolate, or sodium thioglycolate. On top of the cream, many stylists use heat too, which can cause further damage to the hair.

When these straightening products are applied, the hair’s natural bonds are broken, changing its structure, and allowing stylists to reset the bonds to create a straight finish. As the hair grows and roots come in, the natural structure begins to show, requiring touch-ups around every six to eight weeks.

Permanent hair straightening is highly appealing because there’s no daily maintenance required, like using heated tools, oils, and other products and treatments to maintain the look. While there are less powerful at-home hair straightener products, there are serious risks to doing these treatments on yourself.

An experienced stylist can ensure the process is done properly, minimizing risks as best as possible. They can also give guidance on crucial aftercare. In general, it’s not recommended to use hair relaxers more than every three to four months because of how harsh the chemicals are on hair.

Uterine cancer accounts for around 3% of all new cancer cases in the U.S. While rare, uterine cancer rates have been on the rise for more than a decade.

There are two types of uterine cancer: endometrial cancer and uterine sarcoma, the latter of which is extremely rare. Endometrial cancer is one of the most common cancers that affect the reproductive system.

Many risk factors for uterine cancer relate to hormonal balance. Obesity, certain ovarian diseases, early menstruation, and late menopause, as well as family history and age, can increase risks. But the cause of uterine cancer is still unknown to doctors.

Symptoms of uterine cancer include bleeding between periods, vaginal bleeding after menopause, pelvic pain or cramping, certain vaginal discharge when postmenopausal, and prolonged, heavy, or frequent vaginal bleeding over the age of 40.

Knowing the signs of uterine cancer and seeing a doctor when abnormal changes or symptoms occur is essential. Like all cancers, the earlier it’s found, the greater chance of successful treatment and survival. When uterine cancer is detected early, the survival rate is extremely positive – 81% of people are alive five years after diagnosis. And if cancer hasn’t spread outside the uterus, the five-year survival rate is 95%.

If you experience any symptoms or have concerns, speak to your doctor. They can perform the necessary exams and tests to screen for uterine cancer. Hair straightening chemicals are in demand in the U.S., especially among Black women — this demographic makes up the majority of consumers. While the popularity of hair relaxers has declined recently, the market size is still expected to reach $854 million by 2028. These relaxers… For the millions of Americans who have used chemical hair straighteners and relaxers, the release of the National Institutes of Health (NIH) study about the impact of these products on their health was damaging. For years women have applied chemicals to their hair to relax… Countless women across the country regularly use chemical hair straightening products, especially Black women trying to change the appearance of their natural hair. But they may be unknowingly jeopardizing their health. A study released in October by the National Institutes of Health (NIH) showed that… In a new study released last month, researchers from the U.S. National Institutes of Health (NIH) have found a link between hair straightening chemicals and an increased risk of uterine cancer. The findings are alarming for the millions of women who use these products. These…